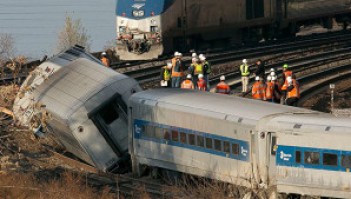 The driver of a train that derailed late last year in New York City, killing four passengers, reportedly suffered from “severe sleep apnea.” William Rockefeller, the engineer at the controls of the Metro-North commuter train that derailed in the Bronx, had the sleep disorder at the time of the accident, and it had not previously been diagnosed.

In a development that could have wide-ranging implications for those who treat sleep disorders and/or sell sleep-related equipment, it is now confirmed by what those in the industry already knew, namely that sleep apnea can “cause drowsiness.”

“I was dazed, you know, looking straight ahead, almost like mesmerized,” Rockefeller reportedly told investigators. “I don’t know if anybody’s ever experienced like driving a long period of time in a car and staring at the tail lights in front of them, and you get almost like that hypnotic feeling staring straight ahead.”

“The disorder, characterized by shallow or interrupted breathing during sleep, often goes undiagnosed, according to the U.S. National Institutes of Health,” wrote Jonathan Allen of Reuters. “Jeffrey Chartier, Rockefeller’s lawyer, also confirmed the diagnosis, saying Rockefeller cooperated with investigators and provided access to his medical records.”

Rockefeller’s last routine physical examination for Metro-North was in May 2011, and his last visit to his own doctor was in May 2013, the report said. “Before the accident, doctors had diagnosed Rockefeller as obese and having hypothyroidism, high cholesterol, low testosterone, vitamin D and B12 deficiencies, and mild high-frequency hearing loss,” wrote Allen.