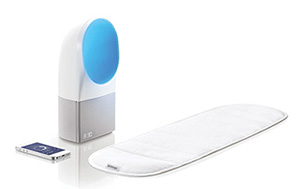 As reported by BBC News, a company called Withings is set to roll out the Aura “Smart Sleep” system.

One part of the device slides under the mattress to study the dozing owners while another screens their bedroom environment. It is the first of more than a dozen sleep-related gadgets set to be launched.

The Aura system consists of three parts:
1) a soft padded sensor that is slipped under the mattress which the firm says is able to record body movements, breathing cycles and heart rates;
2) a device that should be placed next to the bed that includes sensors to study noise levels, room temperature and light levels. In addition it contains a clock, a speaker that plays alarm sounds and a circular LED (light-emitting diode) lamp; and
3) A smartphone app that controls the system and provides feedback about the sleepers’ night.

The light changes color from blue to yellow and red during the course of the night on the basis of research that different light wavelengths can affect the secretion of hormones. The rival Philips’ Wake-up Light lacks the mattress sensor but can charge a smartphone.

Studies have suggested that blue light stimulates melanopsin – a pigment found in cells in the eye’s retina, which send nerve impulses to parts of the brain thought to make a person feel alert.”