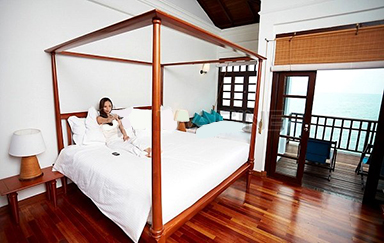 Most people have heard the sage advice to keep TVs out of the bedroom. Instead, the bedroom should be for sleeping and not watching television.

What about keeping the smart phone, tablet, or laptop away from the mattress? As it turns out, scientists at no less than Harvard Medical School have found that specific wavelengths of of light can suppress the slumber-inducing hormone melatonin in the brain.

“We have biologically shifted ourselves so we can’t fall asleep earlier,” said Charles A. Czeisler, a professor of sleep medicine at Harvard Medical School in an article in The Denver Post. “The amazing thing is that we are still trying to get up with the chickens.”

According to the Post, the result is less sleep, and less time for the body to recover. In the U.S. alone, revenue from clinics treating sleep disorders expanded 12 percent annually from 2008 to 2011, reaching $6 billion, according to IBISWorld. Drowsy drivers cause 1,550 fatalities annually, the National Department of Transportation estimates, and insomnia-related accidents in the workplace cost $31.1 billion annually, a study last year found.

“Sleep is in a battle for our time with work life, social life and family life,” said David Hillman, a sleep specialist at the Sir Charles Gairdner Hospital in Perth, Western Australia, and the chairman of the Sleep Health Foundation. “For a lot of us, it comes off a poor fourth in that battle.”

While the noisy ping of a nocturnal e-mail or text message can interrupt sleep, staring at the gadgets’ screen late at night may be more detrimental, according to researcher Czeisler, who is also head of sleep medicine at Boston’s Brigham and Women’s Hospital. It comes down to the body’s circadian rhythm, which has been affected ever since the invention of the electric light.