The part of the brain that stores memory appears to shrink in people with sleep apnea, adding further evidence that the sleep and breathing disorder is a serious health threat. 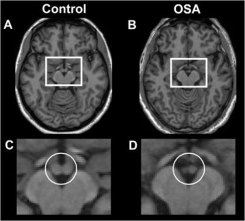 The findings, from brain scan studies conducted by researchers at the University of California, Los Angeles, show for the first time that sleep apnea is associated with tissue loss in brain regions that store memory. And while the thinking and focus problems of sleep apnea patients often are attributed to sleep deprivation, the scans show something far more insidious is occurring.

“Our findings demonstrate that impaired breathing during sleep can lead to a serious brain injury that disrupts memory and thinking,” said principal investigator Ronald Harper, professor of neurobiology at the David Geffen School of Medicine at U.C.L.A.

The researchers don’t know why the sleep disorder affects brain tissue but theorize that it’s related to repeated drops in oxygen. During an apnea episode, the brain’s blood vessels constrict, starving its tissue of oxygen and causing cells to die. The inflammatory process, also linked with heart disease and stroke, further damages the tissue.

The data show the importance of early diagnosis and treatment of sleep apnea.