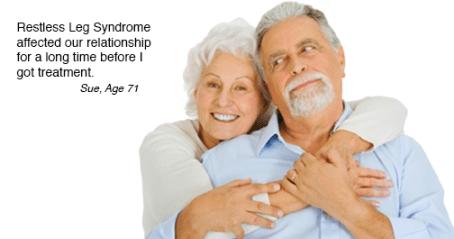 Do people snicker when you tell them you have Restless Leg Syndrome (RLS)? They wouldn’t if they knew the amount of sleep deprivation RLS can cause. The name Rest­less Leg Syndrome– may be part of why people don’t take this condi­tion as seriously.

Restless Leg Syndrome causes an urge to move the legs and sometimes arms and it is accompanied by unpleasant sensations in the legs. It generally is worse at nighttime and is relieved by movement. In a large number of cases it can be accompanied by sleep deprivation or sleep apnea and then it is also called periodic limb movement disorder.

The cause is known on­ly in a minority of cases. About 40 percent seem to run in fami­lies and several genet­ic factors have been iden­tified. Iron deficiency sometimes is associat­ed with RLS and replacement of the iron can im­prove symptoms. Mod­erate exercise, leg mas­sage and heat (say, a warm bath before bed) are some non-drug ways of improving symptoms. Levodopa/carbidopa, a Parkinson’s drug, is an effective treatment; pramipexole (Mirapex) and ropinirole (Requip) also are effective for ma­ny people.

Some people with restless legs syndrome never seek medical attention because they worry that their symptoms are too difficult to describe or won’t be taken seriously. Some doctors wrongly attribute symptoms to nervousness, stress, insomnia or muscle cramps. But RLS has received more media attention and focus from the medical community in recent years, making more people aware of the condition.  An expert in the condition, usually a neurologist, is essential for severe cases. A specialist in diagnosing sleep apnea will be able to evaluate if the condition is causing sleep apnea and it may be necessary for the physicians to coordinate treatment.

You can learn more about Restless Leg Syndrome at the Mayo Clinic website: http://www.mayoclinic.com/health/restless-legs-syndrome/DS00191